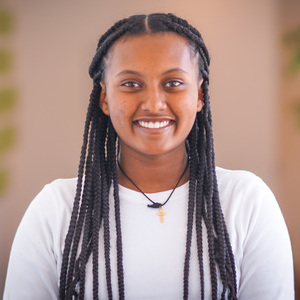 University of North Carolina at Chapel Hill
Class of 2026

Fitsum and her family came to the States in 2009, leaving behind most of their family. From a young age, Fitsum learned the importance of the family that you can make. Through their church, they became a big family. As a child, Fitsum was a little sister to most of the community, but as she grew older and took on more responsibilities within the church, not only did she become an older sister to the young children, but also a sister to the adults. Because of the tight knit community that Fitsum has grown up with, she tries to bring a sense of community into every interaction she has. When Fitsum was looking for a program that would help her prepare for her future, it was the idea of a close community of teenagers working to get into college that brought her to the non profit organization Carolina Youth Coalition. When she was looking for her first job, it was the idea of coming together to help low income families get access to technology that brought her to the non-profit organization Eliminate the Digital Divide. Through the influence that these organizations and other programs have had on her and because of the change being a first generation American has had on her life, she decided that she wanted to impact the world by helping to technologically advance developing countries, starting with her home country.